Un chien armée israélienne attaque un manifestant palestinien de Kafr Qaddum, près de Naplouse, le 16 Mars 2012. AFP Photo: Jaafar Ashtiyeh
In the village of Kufr Qaddoum in the northern West Bank, were more than 4000 Palestinian live, the Palestinian residents organized a weekly demo demanding that the Israeli occupation open the main village street, which has been closed since 9 years, forcing pregnant women, patients, students, ambulances and all the residents of the village to walk very long distances using winding and claying roads to reach the center of nearest city, Nablus, and to return home. The time which the residents need for this distance is seven times more than the time needed by using the street which is closed by the Zionist occupation, 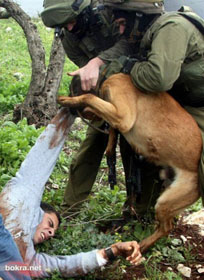 The Zionist Israeli occupation with its apartheid colonial regime against Palestinians, sees that the closure of Palestinian cities, towns and village entrances is not enough, so they decided to punish the residents of these cities who open their mouth and protest peacefully against the apartheid regime of Israel. The ministry of war in Israel, the so-called civil administration sent to the Palestinians in Kufr Qaddoum village in the occupied West Bank, wild Army dogs and IDF soldiers to silence the residents. On Friday 16 2012, the criminal israeli soldiers fired tear gas and rubber bullets at the protesters and after some of them were injuring, they let trained dogs attack and maul them. This criminal attack and brutal scenario was approved at the high levels at the IDF headquarters.

The video below shows how the occupation soldiers ordering the Army dogs to attack the peaceful demonstrators and to eat their bodies. Ahmad Shtewi, age 24, is the person who seen in the video while the dog eats him. His leg was broken. The video also shows an Israeli soldier attacking Murad Shteiwi, he and then he sprays Shteiwi with some sort of sleeping gas. After the brutal attack, they israelis arrested the victims. Both were taken to the detention of Hawara near Nablus and seriously beaten.

The Army dogs eating the body of Mr. Ahmad Shtewi indicate the extent of the injustice against the Palestinian people for decades, not only by the zionist israeli occupation, but also by all Western countries and the international organizations, which supports Israel and its unending crimes by looking away and in every other possible way.

Israel has used Army dogs to humiliate Palestinians since decades. I still remember an Israeli Army officer who threatened to kill me after I shot some pictures of him while he practiced his sadistic hobby of humiliation on a group of Palestinian workers on their way to Jerusalem. The picture of that Army officer and his dog is below.